This trip had a lot of themes: visiting national parks, catching up with friends I hadn’t seen in years, seeing mountains of all sorts, and of course, seeing The West one last time before I get an apartment in the eastest part of the East Coast and settle into the bubbliest part of the liberal bubble ecology. But another theme, unexpectedly to me but quite predictably to probably anyone, is that we have played a shitton of board games. We went to actual board game cafés in Portland and Denver (of course), and found ways to play quite a few other games at various times. Below is a sampling of some of the games we’ve discovered or rediscovered on this trip.

Gameplay: Star Realms is a deck-building game with Trade ($), Combat, and Authority (health). You start with eight Scouts that give you one Trade each, two Vipers that provide one Combat, and from there you simply buy cards from the main deck, working your way up to ever more powerful Ships and Bases. You win by reducing your opponent’s Authority to 0 before they get you.

Review: This is one of the most pleasantly complicated games I have ever played. There are four factions—Trade Federation, Imperial, Blob, and Machine Cult—and before we’d had the game for three weeks, I’d written a 2,500-word essay on the strengths, weaknesses, and strategies of various factions. You can build a Blue deck that’s rich in Trade and gaining back Authority, a Red deck that tries to reduce your deck size until you’re only drawing your best cards, a Blob deck that spawns huge swarms of Blobs, or a Yellow deck that does well at just about anything. (Or combinations!)

Rebecca and I have played several dozen games so far, and bought our first expansion about two weeks after the original deck; the two combined were only about $35. The strategies you can create are so much fun, and so satisfying—there’s nothing like abusing your draw-card powers to pull 10 or 15 cards in a turn and create an unstoppable war-machine of a hand. It’s also a game that allows for great comebacks; there was a time in Yellowstone where I had Rebecca down to 2 Authority, drew two straight hands without any Combat power, and then watched in horror as she marshaled an attack for 25 that blew me right down to zero. And the diversity of cards allows for at least a dozen legitimate strategies to pursue; there’s not one clearly dominant path to pursue, and even if there was, the randomness of the main deck ensures that you won’t have access to it every game.

Verdict: I can’t recommend this game highly enough, and will happily shove it in the face of everyone who enters our Cambridge domicile.

Betrayal at House on the Hill

Gameplay: Another complicated game that gets easy after a couple of repetitions. You and your fellow explorers are exploring an abandoned house, discovering new rooms with Events, Omens, Items, and effects that raise or lower your stats (Might, Speed, Knowledge, and Sanity). At some point after enough Omens have been discovered, the Haunt will begin, one of the explorers will turn traitor, and you will play out one of fifty different scenarios as the explorers and the traitor struggle for victory.

Review: I played two of the scenarios. In one, we were transported to an alien dimension and had to somehow return the house to its true dimension before the traitor, or the acid fog that was the air, killed us. In Game Two, I was the traitor, and summoned a monster called Crimson Jack to chase my erstwhile friends around the mansion; I managed to kill Rebecca, but my friend Sophia destroyed me with a mystically enhanced spear.

I didn’t like this game quite as much as Rebecca did, but it was extremely entertaining nonetheless, particularly in Game Two. The discover-it-tile-by-tile nature of the House itself ensures that you’ll never have the same geography twice, and the fifty different scenarios—all of which make different tiles vitally important—mean you’ll have to play a lot before exhausting this game. I got a really nice RPG-esque feel from it; I can’t remember if it was Rebecca or I who pointed this out, but it’s one of a couple games we’ve played that takes the infinite choices of an RPG and condenses them to a playable, DM-less, but still arresting experience.

Verdict: My heart was beating fast when I was chasing them around the mansion—I was one hundred percent into the experience. I’d absolutely like to play this again. 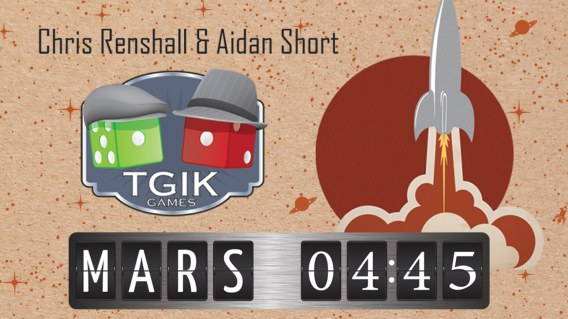 Gameplay: Have you played Spit? Okay, good, you’ve got the basics of this game. You’re trying to build a Mars colony by assembling piles of cards. For example, an orange Rocket deck needs an orange 1, 2, and 3 before it’s complete, and then the person who completes it gets it; everyone’s throwing cards into the middle of the table, so bogarting your fellow players’ work is part of the game. The first player to assemble a complete colony wins.

Review: There’s not exactly any subtlety to this, but it has the same manic energy of the original Spit or Egyptian Rat-Screw, or Golf, or any of those games. You have to be aware of what you’ve already put down, what you still need, and what your fellow players are working on, so you can swoop in and pirate it if need. There are complicated rules regarding scoring, but that comes later—the real fun of the game is in building up your modules, managing your deck and playing hard.

Verdict: Not the kind of thing that you play 30 times in three weeks, but a quick-playing, energizing, good game.

Gameplay: You are a railroad looking to expand. Before you lies a map of the United States and Canada, with major cities connected by rail routes of one through six cars. Draw cards from a communal pile; when you get enough of the right color, use your little plastic train cars to connect your chosen cities. You get points for your routes, and you also get points for completing mission cards, like connecting Seattle and Houston (no matter how you do it). But beware—if you have incomplete goals at the end of the game, those points will be subtracted from your total!

Review: I’d played this a couple of times before we brought it out in San Antonio and then again in Portland. It’s a lovely game. Gameplay is primarily focused around the Goal cards; the U.S. version is big, but with 3-4 players, you’ll inevitably have Catan-like competitions to fill a crucial route before your competitor (thus blocking him/her off). You can still have fun without being super competitive, though, which is nice. It’s quite a feeling to scrimp and cadge and scratch out one route at a time until you finally connect the transcontinental route, L.A. to Boston or something crazy like that, which seemed like an impossible dream at the start.

Verdict: A known and welcome quantity, Ticket to Ride is joining Rebecca’s and my growing game cabinet sooner rather than later. 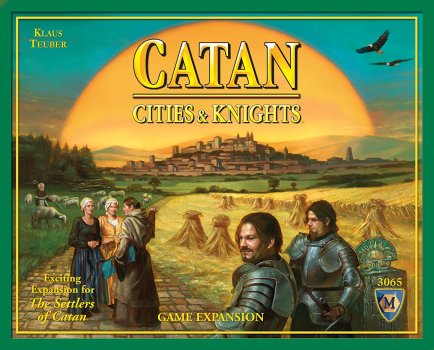 Gameplay: Catan, except with 1) invading barbarians, 2) grain-needy knights to stop them, 3) manufactured product cards that 4) allow you to upgrade various buildings and get 5) spooky-powerful dev-cards.

Review: Despite playing dozens of games of Settlers of Catan and Seafarers of Catan, mostly in college with Sid and Tadd and Dick and The Gang, I’d somehow never played Cities & Knights. I now really want to again—I only played one game, half of which was figuring out the mechanics, and would love to play again now that I’ve gotten a better handle on it. Cities are so much more important, obviously, because only with cities can you produce the commodity cards that are the game’s real currency. Knights become actual tokens on the board who can defend you from the Robber or the entire island from the barbarians when they arrive, as long as they’re well-supplied with wheat. It’s delightfully complex, so much so that you almost lose sight of the traditional-Catan objective of accumulating victory points.

Verdict: I would happily play this again. I don’t have Settlers yet, somehow, although Rebecca or I will undoubtedly remedy this for our shared library sooner rather than later. 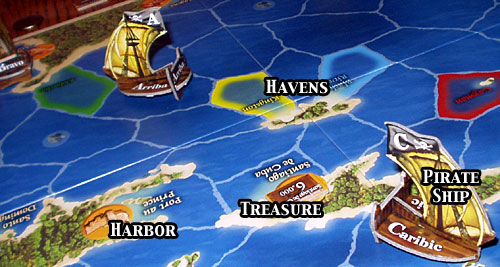 Gameplay: You, greedy bastard that you are, are accumulating treasure stolen from various ports in the Caribbean. You do this by bribing pirate ships with barrels of rum to steal the treasure and bring it to your safe areas, thus earning you doubloons. But you and your fellow players are trying to bribe the same ships, so plan your strategy well and don’t get outbid! The game ends when one player accumulates a certain number of doubloons.

Review: The gameplay didn’t make sense on the box, but it promptly made sense once I started playing. The number of barrels of rum you bid is also the number of spaces you can move (pirates only work once motivated), so each player has to plan their own way of getting the most treasure back to their own safe spots in a given turn. There’s also no carryover between turns—your pirates are only loyal to you until the rum runs out—so if you plan wrong, your treasure ship can be stranded in the middle of the Caribbean, waiting for someone else to outbid you for the cargo. The head-to-head bidding element is really cool, and something I’m not used to; everyone makes their bets simultaneously before any information has been revealed, and then you call out each pirate ship to see who controls it this turn, so there’s a lovely Mexican-standoff-style feeling when everyone’s looking at each other while making their guesses.

Verdict: I don’t know that I’d buy this, but I’d certainly play it again. It’s a kind of gameplay I’m not used to, so it’s a nice palate cleanser for me between games like Catan and Star Realms. 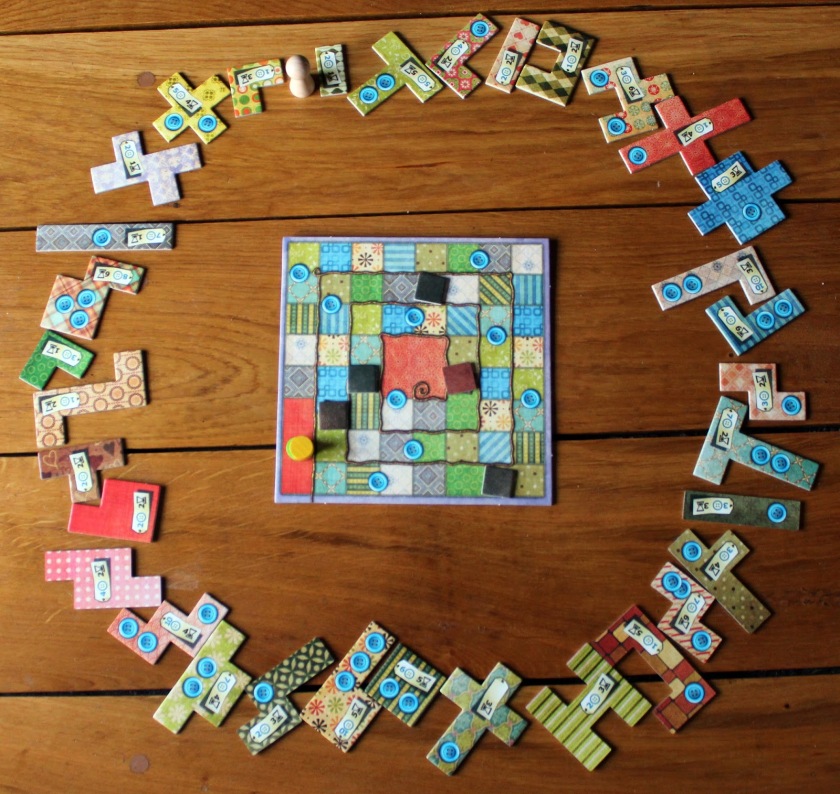 Gameplay: You are a quilter! You and another quilter have 10-by-10 grids which you must fill in with quilt-pieces, which are helpfully arranged in a circle around the board. A token marks the spot on the circle where you start. The key resources are buttons, which you accumulate and use as money, and time; every time you buy a quilt-piece, you move ahead a few spots on a separate board, and when your token reaches the end of the path, you can’t do anything else. Victory goes to the player with the most buttons at the end; you lose two buttons for each empty space on your grid.

Review: This is another old favorite. Rebecca and I discovered this on the same night, in fact, as we found Ticket to Ride; this was way back at Go 4 Games in Metairie, Louisiana, when we schlepped out to those game nights. I haven’t quite figured it out yet, despite playing it several times. Some pieces are extremely expensive in buttons, but take very little time; some cheap pieces propel you several spots forward along the board. The pieces are all kinds of weird shapes, so you have to fit them into your existing pattern as best you can. And some of the pieces have buttons on them, which increases your income. I haven’t yet found the right balance between space and time, accumulating buttons and filling space on the board. That’s still to come. (Rebecca, having been born with a pair of crochet hooks in her hand, is very good at this game.)

Verdict: Bought it back in Reno for $27, so, you know, it’s good! A lovely two-player game that’s now part of the library.