It took me a couple of days to figure out what to write about Houston, and what to write about the experience of being on the road. I thought I was prepared for this because I’ve done AmeriCorps; I lived in a van for 10 months with my team and lived in random places around the country. Vicksburg (MS). Anniston (AL). Atlanta. New York City. Frederick (MD). We traveled from site to site in our van, cooked and ate and slept together, and lived what I imagined to be the life of the nomad.

Turns out road trips are different. We drove across the country in NCCC, sure, but only as a means of getting from one place to the next; we still had homes, even if only for a couple of weeks. In a road trip, you don’t have that (it turns out). We skip across the country like a stone across water, never sinking in. It’s an entirely different feeling.

Also, the days are so full!

No offense to my former jobs, but time at work is not memorable, exciting time. Time at work is doing things until work-time is over. Then you go home and do some combination of cooking, eating, laundry, dishes, cat feeding, cat litter, cleaning, sorting, pressing, folding, mixing, and of course writing, which all bulges into the free time that you spend with your girlfriend or out with friends or doing something fun. For only a couple of hours a day are you doing something memorable, something exciting and new-experiential. Weekends are nice, but they’re partially spent sleeping and lazing around; if you’re like me, they’re maybe half-and-half fun experiential stuff and work/laziness.

Road trips apparently are not like that, at least the way we’ve started to do it. We had two days in Houston, staying with our overwhelmingly kind and accommodating hosts, Fritz and Michella. On our first day there, we visited the Yard of Giant President Busts, a warehouse/concert hall full of Raggedy Andy dolls that looked like the beginning of a horror movie, and a bar that seemed like a very small, very mild version of Burning Man.

On our second day… let’s see. We started the day with a wonderful breakfast cooked by Michella, and then a hot yoga class, which no one told me was a hot yoga class until right beforehand, and it turns out they really mean it. We drove from there across Houston (which is as wide as a Martian moon) to the NASA space museum, which, well… 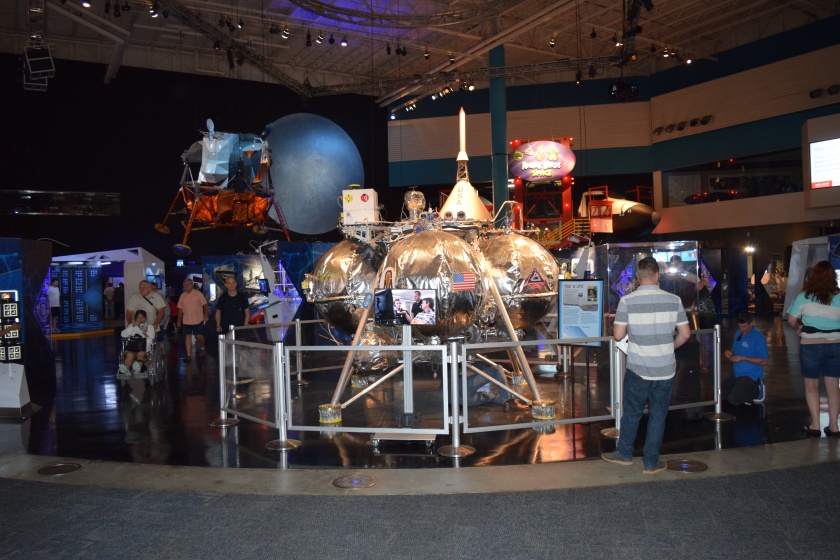 It’s like that scene in Toy Story where Woody and Buzz go to Pizza Planet.

Rebecca volunteered for a what-it’s-like-to-live-on-the-ISS demonstration, because of course she did…

…and flatly refused to pee in the toilet on stage.

It’s hard to convey just how unnerving and how honestly mind-blowing these exhibits were in practice. The man-model up there is rotating as you see him, in a way that completely rocks your idea of what gravity is and where you purport to be standing. The whole interior of that walk-in exhibit, the Skylab mock-up, is designed so that the cabinets and handles are accessible at impossible-on-Earth angles. When you stand on the floor and look up at them, you feel as if you could just push off the floor and rise to meet them.

Also this thing HAS BEEN TO SPACE. 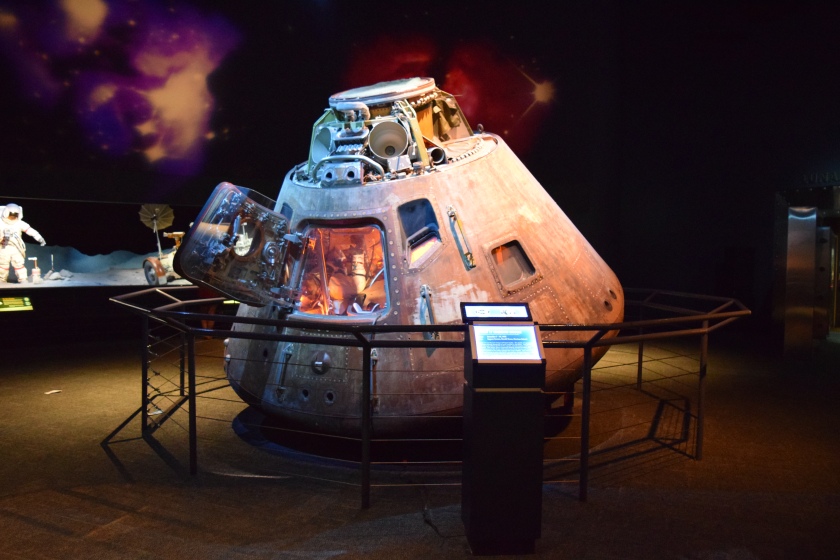 These are actual NASA spacecraft that actually were shot atop a rocket into god damn space.

And then there’s this.

Which we got to go inside.

And be cute outside.

When that ended, Fritz and Michella took us to an apparently legendary Houston taco place called Torchy’s Tacos, and then to a dance hall where the following things happened:

1) The door guy instantly called that we were not from Texas despite our cowboy hats, because “your [R’s] hat is backwards, and you’re wearing a felt hat with a scorpion on it. And anyone from Texas who wears a cowboy hat wears boots with it”. We, of course, were not.

2) There was a wooden lozenge with a bar in the center that served as a dance floor, and which Rebecca compared to a roller-skating ring, upon which we danced a lot.

3) We learned the Texas two-step and, thanks to Fritz’s friend Tyler, a whole bunch of spins that go with it—which are really fun and which we’re continuing to practice!

4) Country karaoke that included me doing Bob Dylan, and both Fritz and Rebecca showing off their vocal talent.

5) Watching really experienced couples dancing is an absolute treat. We watched older, presumably married couples swinging and twirling and two-stepping around the floor like they’d been doing it in the cradle, in perfect seamless unison—and even when they screwed up, correcting it without even noticing.

That was ONE DAY. (And the next afternoon, before leaving for San Antonio, we mountain-biked through Memorial Park.)

That day, while fun, was a healthy reminder that I need my introvert-recovery/writing/huddled-around-a-computer time. It was go, go, go, from wakeup ‘til bedtime.

Speaking of which, it’s close to 1 AM in Cibolo, TX, and I have an asleep to be. Will post San Antonio’s retrospective at some point tomorrow.

Thanks for reading, y’all.