In the Extra History series about Korea’s Admiral Yi, creator James Portnow spends much of his after-hours Lies episode talking about historical narratives. During his life, Admiral Yi is presented as an unfailingly noble and honorable person who persevered despite being betrayed time and again by unscrupulous nobles. His humbleness, willingness to work hard, and steadfast righteousness against all incentives are part of what make him Korea’s national hero.

Portnow talks about how this story is part history and part myth. Admiral Yi was that person, and he did do those things. But the reason he is celebrated for them in Korea, besides the fact that he won a war against Japan essentially by himself, is that he exemplifies the Confucian tradition of the humble, hard-working public servant. His story fits into and feeds an existing Korean historical narrative that those sorts of people are the righteous and prosperous ones, and which presumably forms a key part of Korea’s national identity.

I was thinking about that when Rebecca and I visited the Alamo, located in San Antonio, Texas. I knew vaguely about the Alamo as the last stand of embattled, outnumbered Texans, but I had no idea how great an influence it has had on Texas’s conception of itself. 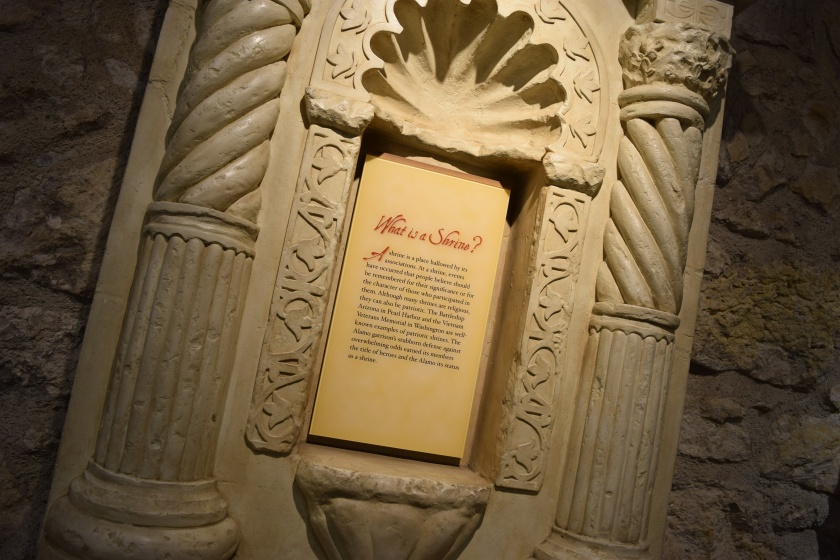 The video about the Alamo’s history, the signs outside and inside the Alamo (including the church where the lastest part of the last stand was made), and various other placards and inscriptions refer to the Alamo as a shrine, and to the battle or the Alamo itself as sacred. The statue in the courtyard outside the present Alamo, in an area once enclosed by the Alamo’s walls, contains a nude godlike figure, sheltering huddled figures at his feet, and a rather messianic inscription (would put a picture, but upload problems).

There is a real sense in the Alamo that this was not just any battle, or even any heroic last stand; the siege and storming of the Alamo was a foundational event in Texas’s history and Texas’s idea of who a Texan is and why Texas is special. The men who died on the walls, in the courtyard, in the barracks, and in the church are presented—in the film, the inscriptions, and so on—as freedom fighters, battling against an oppressive Mexican government that sought to curtail their power. The Alamo fighters are presented as ideal Texans: free men, hard-bitten and hard-biting, who are loyal and honorable and fiercely protective of their rights.

None of which is wrong out of hand. I would love to read more about the details of the Texian/Texan rebellion, why it happened (apparently General/President Santa Anna introduced a new centralized constitution that disempowered the various Mexican states, and a whole bunch of people rebelled) and what happened in it. The details of the Mexican secession from Spain, the Mexican governments and their policy towards encouraging Americans to settle in Texas, Santa Anna’s assumption of power, and of course the battles of the war itself are all lovingly detailed. But the narrative is a little too clean and fits a little too well into the narrative I know of what Texas is. In the Alamo’s telling, the American settlers are presented as basically blameless in Texas’s war for independence; they were encouraged to settle in Texas by generous Mexican land grants and comparatively expensive American ones—so much that they soon outnumbered native Mexicans 10 to 1—then appropriately rebelled when Santa Anna threw out the old Federalist constitution and replaced it with a Centralist one that would deprive them of their rights. It’s all neat, clean and tidy. There has to be more to the story than that.

The lack of eyewitnesses on the Texan side, other than a few women and children and one slave, has also led to what feels like myth-making to me. There are apparently multiple, conflicting eyewitness reports of Davey Crockett’s death, with at least one saying that he died fighting valiantly in battle, and another eyewitness saying that he was captured and executed. There are several accounts of James Bowie (pronounced “buoy”)’s death, which happened in his sickbed; he shot himself, he was carried out of the room by Mexican troops and killed, he was burned to death, he was bayoneted in his bed, or (as depicted in a painting shown in the video) he emptied his pistols at Mexican troops barging into the sickroom before being shot to death. And although fort commander William Travis died unambiguously—killed on the north wall—one story holds that Joe, his slave and the only adult Texan male to survive the battle, was released by the Mexican army and then traveled back to Alabama to inform Travis’s family of his death in person (which, bullshit).

I think all of that is part of the Texas founding myth. I don’t mean myth as in something that is automatically untrue, but myth meaning the stories that tell us who we are and about the world around us, where capturing how it feels is more important than exactly what happened and when. The Alamo was a touchstone for the whole identity of the state of Texas, because of it being a Last Stand and the “I would rather die than retreat”, the honorable frontiersmen who fought for freedom and would not be moved, the leaders who died like heroes. And the modern Alamo museum continues to celebrate that historical narrative, to correlate the story of the Alamo with the feeling of “this is what it means to be a Texan”. That doesn’t mean it’s right or wrong, just that it’s something to be aware of when we look at how people tell their own histories. (It’s also cool to see a state that has such a powerful and passionate founding myth as part of their identity; Wisconsin’s story is “We traded beaver furs… and then we started mining stuff”.)

Regardless, the Alamo was a really cool thing to see. I often have to make an effort to imagine, when I’m at a historical site or old battleground, that the peaceful, tourist-infested buildings or hills around me were once the site of a desperate struggle, fought by real men against men. They’ve made that connection pretty easy at the Alamo, including little touches that connect the events you’re reading about to the landscape around you, like the plaque that marks the wall where Travis was shot. They also tell the full story of the Alamo, from the Spanish missionaries that built the Alamo through the battle and the 170-plus years afterwards. There are lists of the dead in the church, swords and guns and lances in the old barracks, and mock uniforms of both sides. (Whose idea was it to put the Mexican troops in uniforms with white crosshairs on their chests?!) I walked out of there wanting to know more about the Alamo, the revolution, and the whole history of that time, which is really what any museum should try to accomplish.

Downtown San Antonio is also pretty neat, with a long Riverwalk crowded with restaurants that runs right through downtown, a Ripley’s Believe it or Not, kitschy tourist shops (it feels like they looked at the Alamo and went “WE ARE GOING TO MILK THIS FOR EVERY CENT IT’S WORTH”) and some really interesting shops; Rebecca bought a tiny wall-rug charm from a Turkish shop with beautiful glass lamps, and we both got a podiatry lesson from an elderly Indian cobbler when Rebecca asked him about the thread he was sewing with. True story.

Finally, I’d be remiss if I forgot to mention the hospitality of Jay and Leanne, whom we stayed with, and their two spoiled-rotten beagles, Max and Lady. We somehow both forgot to take pictures of them, but they exist—trust us. Leanne fed us the kinds of things that road people just shouldn’t be able to eat (chicken parmesan meatballs, poached pears, brownies and ice cream, homemade pizza, homemade cinnamon rolls) and dispensed a flood of helpful cooking tips, recipes, cookbook recommendations, and pitches for specialized kitchen equipment. (Apparently we need a KitchenAid blender and all of its accessories.)

I decidedly did not get this post up when I said I would last time. Instead of our first night in Austin, I’m putting this up on our first night in Santa Fe, having just finished a seven-hundred-mile drive across the desert of northwest Texas and eastern New Mexico, the part of the map that just looks brown. Another post will be forthcoming about the drive itself.